15 Effects of Drug Addiction You Don’t Want to Experience

There remains ambivalence toward drug addiction where some people still believe it is a morality and self control problem, but, through research and scientific evidence we now have more understanding of its effects as a medical disorder, instead. According to the NIDA, “Addiction is a chronic, often relapsing brain disease.” It involves a mixture of interacting physiological, psychological, and social variables that make it complex, and yet, treatable.

No one sets out to become addicted, but, once it begins to take hold, the effects are more than trivial with consequences that reach far beyond the user. The following are 15 effects of drug addiction you don’t want to experience.

Tolerance is the brain’s way of compensating for the over-stimulation or excessive depressant actions of the drugs. You don’t want to experience a tolerance to the drug which requires more of it to achieve any desired results and increases as the addiction continues.

Sensitization is the opposite of tolerance and is a phenomenon linked to chronic or high dose stimulant abusers. Sensitization causes the person to experience a psychotic episode more intense and longer-lasting with minimum stimulant doses after a prior psychotic experience has occurred. It happens often with cocaine and meth users who suffer intense paranoia or tactile hallucinations (“coke bugs”) from increasingly smaller doses that are no-where near amounts used in the past.

Physical dependence is an adaptation to the drug’s presence that requires certain levels of the drug be maintained in the body’s system to keep from producing physical withdrawals. People who become physically dependent on drugs need consistent access to them or they become limited in their abilities to perform normal, daily tasks. 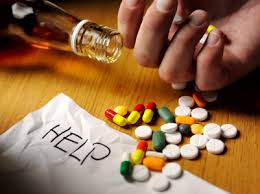 Drug addiction can cause psychological dependence.

Psychological dependence to drugs changes people. Their thoughts, emotions, and motivations for using drugs can become more important than everything else and their values in life become defined by the constant need to seek, obtain, and use the drugs, regardless of who gets hurt.

Cravings are a central aspect of addiction that can last indefinitely for some addicts depending on the drugs they use, the person, and the neuronal adaptations that have taken place. Cravings can disappear for a while and then reappear out of no-where.

Withdrawals from drugs occur from reducing or ceasing use after a dependency is developed. They are typically, painful and unpleasant physical and/or psychological symptoms that overwhelm the person with sickness, instability, or psychosis and for some, the more serious complications can become life-threatening.

Taking too much of any psychoactive drug can cause disruptions in cognitive and neurological systems resulting in psychosis such as hallucinations, paranoia, or bizarre behaviors.

The pleasant and reinforcing effects of drugs in the brain’s reward center becomes “hardwired” reminders that place the person at risk of relapse even when they have no conscious desires to use. Addiction increases the number of “triggers’ or conditioned responses the person becomes vulnerable to from simple thoughts, emotions, or associated reminders.

As addiction to many drugs like opioids, cocaine, or meth continue, many addicts switch to higher potency drugs or alternative routes of administration such as snorting, smoking or intravenous injection to intensify the effects. In addition to increased tolerance, dependency, and withdrawal potentials, the risks of infections, diseases, and other consequences are exponentially increased as well.

10) Diseases and Infections from IV Use

IV use is associated with abscess and bacterial infections, damages to blood vessels and veins, bloodborn diseases like HIV, AIDs, and Hep C, cardiovascular and pulmonary system damages, organ damages from increased neurotoxicity, overdose, and death. According to the Institute of Medicine (US), “Studies have shown that HIV can survive in tap water for extended periods of time.”

Drug addiction alters brain functions leading to loss of memory, inhibitions, judgment, and ability to focus. These effects cost people their livelihoods through missed education and job opportunities, mistakes in reasoning that leads to harmful, dangerous, or immoral activities and predicaments.

Anxiety, depression, suicidal and emotional instabilities go hand in hand with drug addiction and these effects often outlive the addiction long after the person detoxifies from the drugs. Some become permanently disabling that leave the addict unable to hold jobs, manage or enjoy life, and provide for their basic survival needs. Compounding the issues, many psychological disorders progress or exacerbate other mental health issues.

Long-term consequences of drug addiction often mean a lower quality of life because the addict tends to lose their motivations, values, productivity capabilities, and possibly, their moral integrity. It’s hard enough to keep up with maintaining the habit, so, other things tend to become second place.

According to the Institute of Medicine (US),” Drug abuse leads to reallocation of economic support away from the family; lack of participation in family activities, including caregiving; lack of emotional commitment and support for parents and children; and the inability to provide a reliable and adequate role model for other family members, especially children. This impact on the family affects children’s development, leaming, and social relations whether or not actual child abuse and neglect occur.”

Overdoses occur more often than they are ever reported to any medical provider or authority and what many people don’t know is that non-fatal overdoses can also have life-threatening consequences. Common effects of a non-fatal overdose may include pneumonia, hypoxia, and organ or bodily system failures. Death can occur hours or much later after a dose of drugs is administered. For instance, acetaminophen is an analgesic ingredient in many opiate painkillers and death from acetaminophen toxicity may not occur for up to five days with the effects going unnoticed until it’s too late.