What is Drug Withdrawal?

Drug withdrawal is the adverse physical and psychological effects of reducing or ceasing use of drugs once the person has become dependent on them. Dependency can occur without addiction for those who are prescribed drugs for a legitimate medical or psychiatric condition and although these individuals will also experience drug withdrawals when they stop or reduce use of the drugs, they lack the uncontrollable compulsions to use them beyond the prescribed therapeutic purposes.

Many of the effects of drug withdrawal are opposite the effects of intoxication. Someone who has become dependent on the calming, tranquilizing, or sedative effects of drugs like opiates, alcohol, or benzodiazepines are likely to experience increased agitation, anxiety, and autonomic hyperactivity as the cravings and physical symptoms of withdrawals become much more intense. According to the Institute of Medicine (US) “For individuals with a history of self-medication of opiates and alcohol, physical dependence is an important factor in motivating individuals to seek out and self-administer opiates and alcohol.”

For someone who has become dependent on stimulants such as cocaine, meth, and amphetamines, the extreme highs turn to extreme lows. The depressing symptoms of withdrawals often leave stimulant users despondent with the need to sleep followed by an overwhelming surge of psychological and emotional upheavals which are common with these types of drugs.

Additionally, there is an unpredictable amount of neural toxicity that damages organs and systems when drugs contain unknown variant chemicals such as those used in the productions of methamphetamine and synthetic drugs or those left behind in the processes of heroin and cocaine. Because many of these drugs are used via rapid delivery methods and the body is often unable to dispel the toxins, the adverse effects of withdrawals may be multiplied.

Role of Dopamine in Desires to Use and Dependence

Drugs work in different ways and some have more psychoactive properties than others which increase their abuse potentials. Drugs like alcohol, opiates, cocaine, meth, amphetamines, benzodiazepines, and hallucinogens are all able to increase dopamine release to make the person feel good. Dopamine is a naturally occurring chemical our brains produce allowing us to feel good and enjoy pleasures in life while also reinforcing those experiences that bear repeating.

These drugs, however, are able to increase dopamine levels to abnormally high amounts causing euphoria and making them more desirable than many other drugs, while changing the way the brain functions. Some drugs like heroin, cocaine, and meth do this more quickly and some drugs do it longer; or the effects may be intensified by snorting, smoking or inhaling the drugs which allows the chemicals to reach the brain more rapidly.

As the brain tries to compensate for the over-stimulation of the reward system, it actually loses its ability to produce dopamine without use of the drugs. This is why people feel confused, anxious, disinterested, fatigued, depressed, and generally, dope sick, with intense cravings for more drugs when the levels of the drug are reduced in their systems. 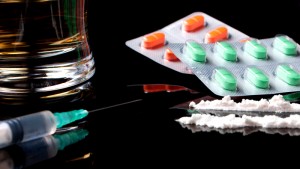 Withdrawal symptoms depend on which drug has been used.

Withdrawals will be different for everyone based on their health and biological factors, environmental influences, drug use histories, and of course the neuronal adaptations that have occurred within their brain and bodily systems. According to the Institute of Medicine (US), “drugs can interact at many different functional levels including the molecular, cellular, and systems levels.”

Stimulant drugs like cocaine, amphetamines, and methamphetamines have been known to change brain structures as well as functions which may account for the increased severity of psychological and emotional withdrawals during the acute withdrawal phase. Psychiatric problems including paranoia and schizophrenic-like behaviors have been linked to chronic stimulant abusers because of the extreme neurological impact these drugs have on cognitive and nervous systems.

Opiates, on the other hand, closely interact with midbrain dopamine and endogenous opioid peptide systems causing more extreme physical withdrawals of intense pain and cravings, nausea, diarrhea, vomiting, stress, and overall impaired functioning capabilities. Opiates are more in tune with natural endogenous chemicals and are able to unlock the many opioid receptors found throughout the reward circuits in the brain and central nervous system making them appear salient to survival. When a person goes through opiate withdrawal, they feel like they are never going to survive unless they get another dose of opioids.

Alcohol desensitizes and damages nerve cells throughout the brain and central nervous system. A person going through alcohol withdrawals can experience life-threatening seizures, delirium tremens, or schizophrenia as a result of autonomic hyperactivity and the neurological damages that alcohol causes.

Benzodiazepines are tranquilizing drugs that depress the central nervous system. Withdrawals can be dangerous unless the dose is gradually tapered off because once the sedative effects wear off, horrible rebound effects occur. Long term benzodiazepine abusers commonly present some serious psychological and emotional problems during drug withdrawal including panic attacks, hallucinations, and severe suicidal or violent tendencies. They are also prone to paradoxical effects that compound their emotional instabilities during withdrawal.

Cravings can be the most problematic drug withdrawal symptoms outside of any health complications. While they tend to diminish for most individuals over a few weeks or months, cravings for drugs like heroin and other opioids can last a life-time. Normally, dopamine is well regulated within brain functioning systems and only reaches high enough levels to cause euphoria when an unusually pleasing event occurs. The more often a drug is enjoyed and the higher the euphoria, the more associations the brain alerts to and the more important it becomes.

Conditioned cravings are a primary cause of relapse during protracted withdrawals. Even when the person has no conscious desire to use the drugs, the internal adaptations that have taken place can “trigger” cravings as a conditioned response to prior drug use associations.